I have come to realize that the hardest thing about building something is getting started. I sat in front of my computer with my sketches and I was overwhelmed, the task just seemed more than I could handle. It seemed easier to give up but that wasn’t an option. I have spent too much time looking for something to build and now that I finally found it I was not about to just stop.

I figured I’d start with the home page.

Nothing much too it. Just some squares with some text. This part was easy as I had already built the header component and a button component. I hard coded the text in it first just to get something on the screen.

I had started and it’s working. Next I had to add some of the data and use it to build the app. Eventually before I finish I would like to have all the information on a database somewhere but I need to do some research on it first so I opted to use a .json file in the app for now. 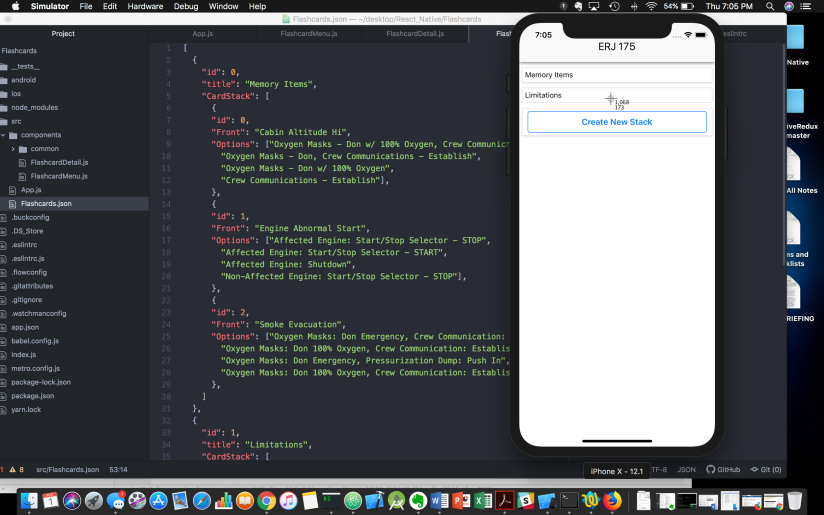 The app looked the same which is good but now the data was coming from the .json file as opposed to being hard coded in.

Now that I have something to show I felt more motivated to keep going.

I decided that instead of making the text highlightable I would make them buttons. I thought buttons would be easier to use and eventually once I figured out some frustrating parts it does work.

When I click on either button I get the object to show up on a console.log. It took me asking for help on StackOverflow to get through a part that had me about to pull my hair. And you know what? It turned out to be a typo. Those typos get me all the time.

You can watch a short screencast video of my progress so far.

So one step at a time and it’s coming together. I am very excited about my progress so far. I can’t wait to keep coding but life has other plans for me for the rest of the day. Hopefully tomorrow will have some more free time.